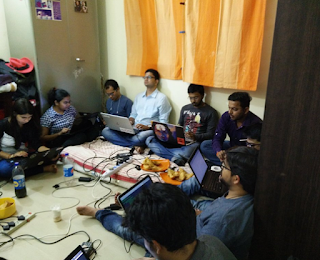 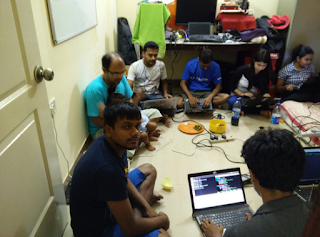 MySQL is an open-source relational database management system(RDBMS). Before proceeding further one should have the knowledge of what exactly database is?

Database is a application that stores collection of data. Relational database management system is used to store and manage huge volume of data, all data is stored into different tables and relations are established using primary keys or other keys known as foreign keys. Primary key is unique, and can not occur twice in one table and foreign key is the linking pin between two tables.
To use MySQL database, it is essential to become comfortable with mysql command  line.  So here are the basic commands which I went through to start with mysql database.

So to see how these commands work I connected to MySQL server using MySQL client using mysql command, as it was already installed in system. After logging in successfully I created a new database for me named test, which I decided will contain different tables having student details, test detail, classes details,score details etc. Once my database was created I created various table inside it defining its parameters. Then I inserted the values to different tables according to the parameter defined by using INSERT command.
After doing this much of work I started playing with the tables by altering their name, by adding something new to them, by adding new column to them , by merging two columns and lots more things. It was a fun to extract different information by using various commands from different tables, and this is how I learned basics of MySQL.
Command Reference: http://g2pc1.bu.edu/~qzpeng/manual/MySQL%20Commands.htm
Posted by Pooja Yadav at 14:16 No comments:

A Day with IRC

IRC is mainly designed for group communication in discussion forums,called channels, it also allows one to one communication via private messages as well as chat. IRC is based on a client-server model. All you have to do is to run a client program on your computer which connects you to a server on the Internet. These servers link to many other servers to make up an IRC network,which transport messages from one user to another. For this only you need an Internet Service Provider to get you connected to the Internet and an IRC Client program.

After setting up with the provider and a client, you can choose a nickname of your choice and then connect different IRC networks. After going through the basic of IRC, I started with IRC and went through few commands and choosed a nickname (pyadav) for me. Then I joined few channels of my interest like dgplug, fedora-cloud, fedora-python etc.

You can find the channel of your interest with the /LIST command. After  finding the channel you can join it by using JOIN command as:   /JOIN #channelname - This changes your current channel to the specified channel and if the channel does not exist already, it will be created and you will be incharge of new channel.  To leave a channel you can use /LEAVE command. Private conversation can be done by /MSG command as  /MSG nickname <message>

A New Beginning with Python

After making my mind to step into programming, the very first question that comes to my mind was "Which programming langauge must be learned to start with programming?" Then I hunted for which langauge should I start with being a beginner and ended up with 'Python' after a long research and conversation with my friends who already are in developing.

Python can become a stepping stone for everyone who want their career in programming universe as it was designed with newcomers in mind. It is easy to learn and grasp as the command are easy to remember because they are similar to the english words we use in our daily life. It is so simple, that you can start coding the very first day and make your own simple programs using python.

There are many more reasons I started with python as its a general purpose,
high level, interpreted language. The first code I leaned was how to print something in python, and it was so easy,I printed 'Hello World!' as it was the first code given in the book which I was referring ie  "Python for you and me".

"Python for you and me" was my first teacher to help me in learning Python (an interpreted , object oriented programming language) and helped me to get into python more and more with very new topics.

Also I joined the course of Udacity that is "Linux Command Line Basics" which was an introduction to the Linux Command Line interface and it
helped me in knowing more about the language and its basics. One thing I liked most about Udacity course is that we have different quizes followed by detailed solution after every topic. This keep us more involved in the course and makes it more interesting to learn and practice.The way of delivering each lesson was  just awesome, so it was worth joining that course.

After gaining enough knowledge about python I just started with some exercise having python programmes, and I found what I was looking for some good exercise of "Coding Bat" related to the topics which I have covered so far in Python.This helped me alot to brush up my concepts in programming.