After a long one month, it was the day (7 Aug) for Pyladies meetup and again we were going to meet at Redhat Pune office. As it was the day I was waiting for after the first meetup, though it was sunday when we usually plan to relax or hang out but I was excited for the meetup. So in morning I went for running in Magarpatta city(Aditi Garden) as it has a nice track for running. Then after having South-Indian breakfast at UpSouth, I came back to my home as it was time to get ready for the meetup as I was running out of time but still I managed to reach on time. When I entered the room there were many people already sat, some familiar to me as have met them in first meetup, few were new to the meetup. After saying hello to the people I also took my seat, then we shifted to the cafeteria due to some maintenance work in that room. 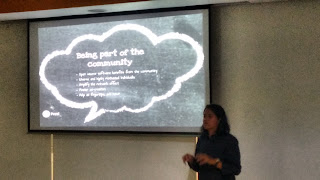 After we all were set, Nisha started with her talk on " Basic Communication skill", as communication is very necessary in open source world or in any community. So it was a great topic chosen by her, as it was a help to all of us in knowing the better way to communicate with the people in various communities so that we are listened and answered by others. As the way in which you communicate is very much important, she discussed about various things, as how to ask questions in a smart way. Do and don't while communicating and many more things. 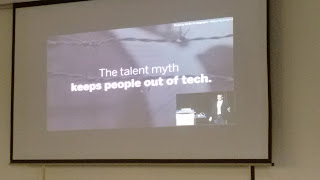 After this there was a video of Keynote( Talk to talk' session) by Jacob Kaplan-Moss from Pycon 2015. Jacob Kaplan-Moss known for his work on Django and the director of security at Heroku. He begin with this intro, talked about his background and what people think about him.He  stated that "People believe that I am successful because of my programming skill. But that simply isn't true: "I am, at best, an average programmer", he said (with a slide that read "Hi, I'm Jacob, and I'm a mediocre programmer."). Then he introduced ultra-marathon runner Ann Trason, who is the most accomplished competitor in the history of that sport. He talked about Trason runs and records, he included that in his talk because he also recently finished his first 50km race, so we can say he was a runner too and I too am a runner who have just started running a month back : ). So I liked this part . Then he talked about programming abilities and how people measure that. He talked about a U shaped curve on which people distribute the programming skill and most of them are on one end or the other but  for going from absolutely terrible to wonderful we have to traverse the middle ground. After this he talked about myth about the U curve that sets up a world where you can only program if you are a rock star or a ninja. This myth is preventing "most of the growth and the improvement we'd like to see". And this motivated all of us sitting there and then he said" The truth is that programming isn't a passion or a talent, it is just a bunch of skills that can be learned". Also he added 10x programmers to his talks adding the famous picture of Linus Torvalds flipping off NVIDIA under the "brilliant asshole" label in his slide. He then asked what a 10x programmer look like and put up a series of pictures of "Mark Zuckerberg". When we see someone who does not look like one of those three men, we assume they are not a real programmer, he said. Almost all of the women he knows in the industry have a story about someone assuming they aren't a programmer. He talked to multiple women attending PyCon 2015 who were asked which guy they are there with—the only reason they would come is because their partner, the man, is the programmer. "If you're a dude, has anyone ever asked you that?" And this was a great motivation for the ladies present in pyladies meetup. He also talked about Lynn Root a founder of the San Francisco chapter of PyLadies, a Python Software Foundation board member. In the of the keynode he took several questions. It was great keynode selected for this meetup. 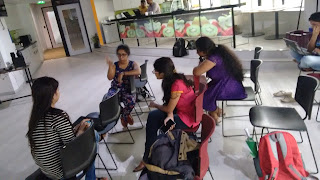 After this it was the time for lunch, and during lunch time we had quite interesting conversation with each other, we all  talked about Pycon 2016( Delhi) which I am also attending and Pyladies and many more things.

After lunch it was the time to learn some python skills. So there was a session  'Hands on Python' by Chandan Kumar. He started from where we left in the last meetup. He covered several topics like functions, different python module and file handling. So we practiced all these , ending up with an assignment given by Chandan. There was a one more session on Object Oriented Programming but as it was already 5 in evening, that why we decided to have that session in the next meetup.So we end up with a short conversation that in future what else we can do for pyladies meetup so that we have more pyladies member and we all left with a plan to meet next month again : ). 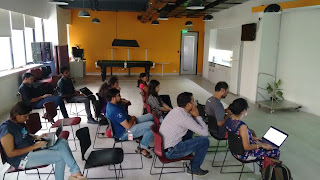